A Philosophy of West Philadelphia's Future 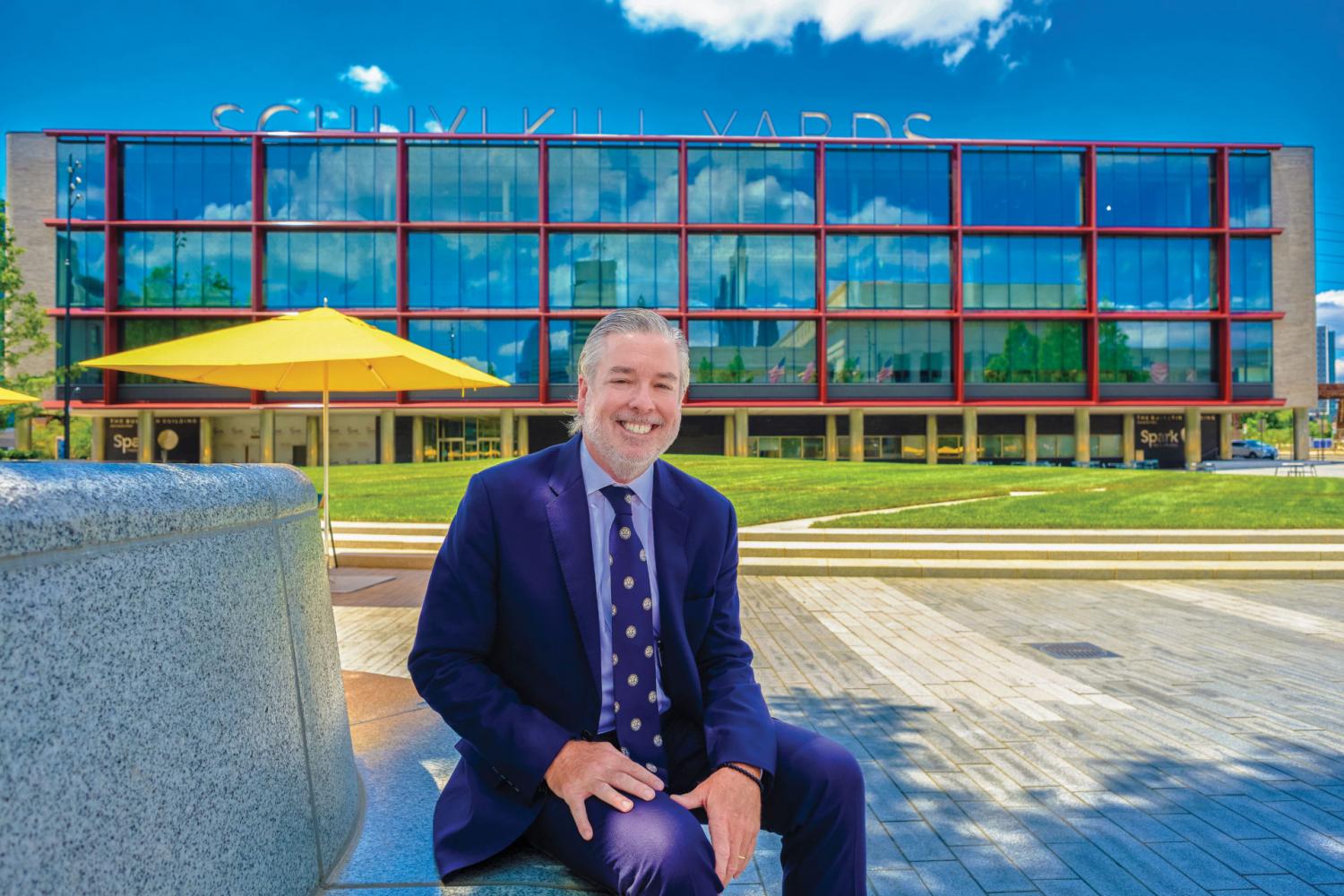 A Philosophy of West Philadelphia's Future

This is Drexel Square. Before, this space was an asphalt parking lot alongside an unadorned office building. Its transformation is the preamble to a swath of development that will ring the square with landscaped streets and modern high rises to house a new life sciences and tech innovation district that will change West Philadelphia.

On this sweltering July afternoon, a suited President John Fry with a snug blue tie lingers in a spot of shade. As he savors this first fruit of a master plan 10 years in the making, Fry unspools a far-reaching vision, one that’s research-centric, but also civically engaged, for what’s to come here and beyond — all built on what he calls “really sweet deals.”

“We get to curate what we need,” Fry says, “but use other people’s financial capital to achieve our goals.”

It needed more beds for its swelling student population.

It needed accommodations for visitors and parents.

At the time of Drexel’s founding in 1891, this area was a busy industrial district filled with factories, ironworks and slaughterhouses. Anthony J. Drexel chose to build his school close to the workers who roamed this region, to provide them with access and advancement, regardless of race, sex or creed.

“That was not an accident,” says Fry. “He thought deeply about that.”

Nonetheless, for most of the 20th century Drexel has fallen short of the founder’s dream.

Forty-five percent of residents in the 19104 ZIP code, which includes Drexel and Penn, live below the poverty line — more than double the Philadelphia metro area’s rate, the Census finds. In his first Convocation speech in 2010, Fry imagined how A.J. Drexel would feel if he strolled through parts of West Philadelphia today.

“I think he would have felt, ‘Boy, my institution could have done a lot more but didn’t,’” Fry says. “I tried to call the community on that.”

Once Drexel chose Brandywine as its projects master developer, Brandywine introduced a $16.4 million neighborhood engagement initiative as part of Schuylkill Yards. The program is considered the largest of its kind in Philadelphia, and addresses community needs including small, local and minority business development; job creation; affordable housing; capacity building; and educational support. One highlight: About 50 new minority apprentices are either working in the construction trades or on the way to those living-wage jobs, according to Sweeney.

“The objective was to create a true neighborhood, not a collection of buildings, and to have one of the driving predicates of that neighborhood be how we tap into the innovation economy,” Sweeney says.

As part of the Drexel Square renovation, Brandywine undertook a $43 million rehab of the 1954 George Howe-designed modernist Bulletin Building (acquired by Drexel in the ’90s) on the square’s western flank. Now refaced with contemporary glass and 10,000 square feet of street-level retail, it is occupied by Spark Therapeutics, a gene-therapy biotech with a path-breaking treatment for an inherited retinal disorder. Last year, Switzerland’s Roche Holding acquired Spark for $4.3 billion, a stunning return.

The startup was founded as a result of technology and know-how accumulated at Children’s Hospital of Philadelphia. It has grown to 500 employees and plans to hire 100 more this year in spite of the pandemic.

“Innovation is symbolized by Spark,” Fry says, looking toward the downtown skyline reflected in the Bulletin Buildings’ façade of windows. “It is a company with incredible potential for growth and development to change the economy of Philadelphia.”

For Spark CEO and co-founder Jeff Marrazzo, the company’s expansion in the Bulletin Building offered an opportunity beyond the bottom line: Create a bio-tech ecosystem that supports jobs of the future in West Philadelphia. “I personally wanted to make a bit of statement,” he says.

He calls the national dialogue around social justice an inflection point. “We can accelerate a lot of that work,” he says. “This foundational decision, where we located, set us up to be able to have that impact. Now, we have to do it more consciously, more aggressively and with more directed programming.”

He’s on board with Fry’s vision, which includes developing a training program for community residents to prepare them for Spark’s hiring needs in research, of course, but also in manufacturing, finance, human relations, communications and strategy. The company already participates in the Chamber of Commerce for Greater Philadelphia’s Future Ready program that brings middle school students to Spark for an immersive day exploring gene therapy career options. And Marrazzo looks forward to the “natural connections” with Drexel faculty that come with being a block away, as well as continued hires of co-op students and new graduates.

Around the corner, at 3101 Market Street, is another marker of Drexel’s growing innovation district: The Center for Functional Fabrics, led by fashion designer turned tech innovator Geneviève Dion, professor of design in the Westphal College of Media Arts & Design.

Funded by the Department of Defense and the Commonwealth, the venture aims to restore Pennsylvania’s standing as an American textile manufacturing hotspot.

“By marrying design to technology, Professor Dion has the means to rebuild Pennsylvania’s textile manufacturing industry, this time with an unassailable competitive advantage,” says Richard A. Greenawalt ’66, chair of Drexel’s Board of Trustees. “I’m proud that her discoveries will seed new industries, and that Drexel had the imagination to back her years ago.”

“It’s not just the place,” Dion says. “Schuylkill Yards is a philosophy about what can be the future.”