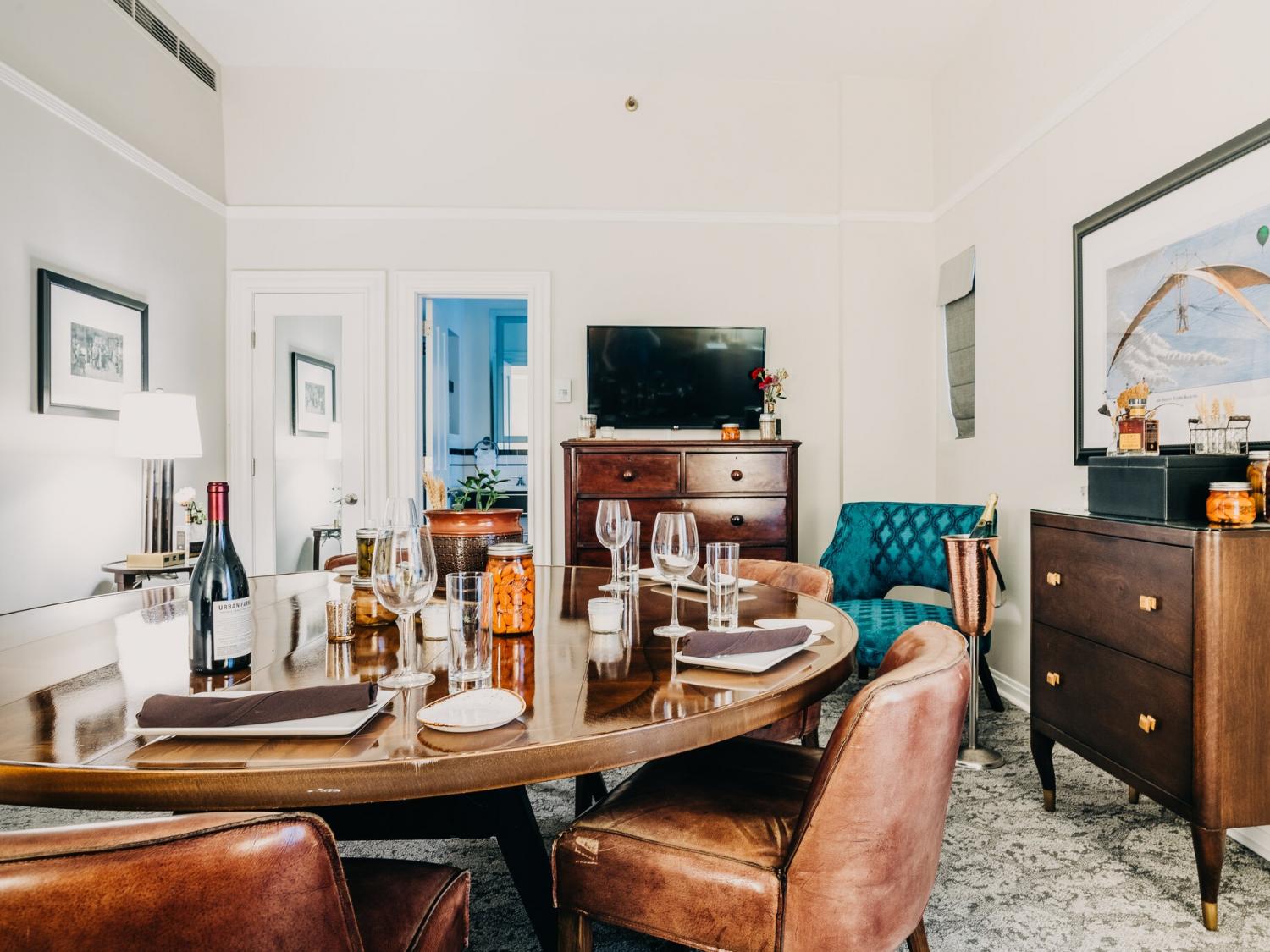 Restaurateurs and hoteliers are teaming up to create private dining experiences that allow guests to get out of the house, but limit their exposure to others.
View All News

It had been six months since Nick Bayer and his wife had been on a date. But with freezing temperatures gripping Philadelphia and indoor restaurant service banned, dinner in a tent wasn’t appealing. So instead of sitting outdoors at the Walnut Street Cafe, a local restaurant, they opted for an elegant meal served in a hotel room that had been converted into a private dining space.

Their night out was the result of teamwork between the cafe and AKA City University hotel, part of a growing trend that is attempting to provide business for two industries hardest hit by the pandemic — restaurants and hotels. (This joint effort is being called the Walnut Suite Cafe.)

This isn’t typical room service. The Bayers didn’t sit on the edge of a bed eating tepid food from a cart deposited in the middle of the room. Instead, for $50, they got use of a suite for three hours to enjoy their $65 per person prix fixe meals (not including beverages) served by a waiter at a laid dining table. To minimize contact, the food and beverages are preordered and prepaid. The waiter not only served, but escorted the Bayers to the room on the 31st floor of the hotel, so he was the only person they had contact with all evening.

“We were really excited, my wife and I dressed up,” said Mr. Bayer, who wore a blazer with a pocket square to his dinner on a Wednesday evening with a Nor’easter rolling in.

The logistics are challenging for the restaurant, since the waiters can’t see the diners to sweep in if someone drops a fork or finds their steak overcooked. The service allows for add-ons during the meal by scanning the QR code on the one-use paper menu, which allowed Mr. Bayer to order a second martini.“So far we’ve been able to anticipate people’s needs and accommodate everything in advance,” said Branden McRill, the chief executive officer and founder of Fine-Drawn Hospitality, which owns and operates the Walnut Street Cafe. But just in case, a card with the restaurant phone number is left on the dining table.

THE MORNING: Make sense of the day’s news and ideas. David Leonhardt and Times journalists guide you through what’s happening — and why it matters.

Mr. McRill gives credit for the idea to the chef Aidan O’Neal of Le Crocodile brasserie and the Wythe Hotel in Brooklyn, which created Le Crocodile Upstairs by removing beds and installing custom-made tables in 13 hotel rooms, where private parties of up to 10 could dine ($100 per person for a three-course dinner). The NoMad Manhattan hotel had a similar effort, the NoMad Feast, but both were suspended when stricter dining restrictions for restaurants went into effect in New York in mid-December.

The Bayers, who live just a few blocks from the AKA hotel, went home after dinner. But since the Walnut Suite Cafe launched shortly after Thanksgiving, about 20 percent of guests have opted to stay for the night, with their $50 hotel fee applied to the room charge of $250 for a one-bedroom suite, or $550 for a two bedroom, Mr. McRill said.

Of the 100 hotel rooms at the AKA, 15 suites have been designated for dining, limited to a maximum of four guests per party. For New Year’s Eve, the Walnut Suite Cafe is offering an earlier three-course sitting for $95 per person, (optional $45 wine pairing), or a later five-course meal for $150 per person (optional $65 wine pairing), plus the $50 room fee. No suite is used more than once an evening to allow for proper cleaning.

With New Year’s Eve approaching, similar partnerships have cropped up across the country. Here, some of what’s on offer:

After restrictions in Boston limited outdoor dining to private property, the UNI restaurant moved all its service to nine semiprivate rooms created by taking over the suites on the first two floors of the Eliot Hotel. The beds were removed and one table was set up in the bedroom and another in the front room, with French doors separating the two. Up to six guests per group dine a la carte from the sushi and sashimi menu created by the James Beard Award-winning chef Tony Messina, while the restaurant’s music is piped in to create a familiar ambience.

There is no additional fee for use of the room, but when a party wants the entire suite, there is a minimum $300 food and beverage charge per person. A special tasting menu is being created for New Year’s Eve.

Le Cavalier brasserie opened in the Green Room at the Hotel duPont in Wilmington, Del., during the pandemic. To help with social distancing, some of the hotel rooms are being used exclusively for private dining. Ordering for the family-style meals is done in advance, with a $380 dinner for two featuring two appetizers, two entrees, two sides and one dessert. Each additional person is $150 up to the maximum of 10. Guests can opt to stay overnight, a choice made by about half the diners.

A king bedroom for two with the dining special costs $500. A special New Year’s Eve menu that includes a bottle of champagne begins at $450 for two guests for the evening, or $600 including a night in a classic king bedroom.

In Denver, the Urban Farmer steakhouse has paired with the adjacent Oxford Hotel to offer what they are calling a “steakcation” in converted hotel rooms that have had the beds removed and replaced with dining tables for up to six people. For overnight guests, private use of one of the three dining chambers comes as part of a package that starts with rooms priced from $129, plus a $200 food and drink minimum.

For those not planning to stay the night, the dining rooms are rented for $100 for four hours, in addition to the minimum food charge. The full Urban Farmer menu is available, and on New Year’s Eve, specials will include options such as a charred octopus appetizer and a prime rib entree.

The Hewing Hotel in Minneapolis has transformed 13 hotel rooms into private dining areas for groups of up to six people. The seven-course $110 tasting menu is delivered to the door, and the contactless service continues with the chef, Nyle Flynn, of the Tullibee restaurant explaining his meal via video. An optional $65 wine pairing is also explained remotely. There is a $65 fee for use of the dining room for three hours. Guests receive a 10 percent discount on the price of a stay if they decide to overnight.